Allah says in His majestic book, فَآمِنُوا بِاللَّهِ وَرَسُولِهِ وَالنُّورِ الَّذِي أَنزَلْنَا “Believe in Allah and in His Apostle, and in the light that We have revealed” (al-Taghābun 64:8). The Qur’an is herein described as light, and every khatm around the Qur’an forms a khātam or “ring” of light. Among the Companions are some whose rings of light were weekly, in accord with the original parting of the Qur’an into seven manāzil, and from them came the widespread practice of completing monthly rings of light, in accord with the later parting of the Qur’an into thirty ajzāʾ. Al-Ḥasan al-Baṣrī was once asked about his personal rings of light, and he answered, “I have one khatm that is weekly, another that is monthly, and one that is yearly, but I began a fourth khatm thirty years ago that I have yet to complete.” Al-Rābiʿah al-ʿAdawiyyah completed 3000 rings of light in the very grave she had dug for herself in her home, and some sages completed their rings of light on a daily basis! As we broach the end of Ramadan, Lanturna invites you to join our international Rings of Light gathering, including heartfelt prayers in more than ten different languages. 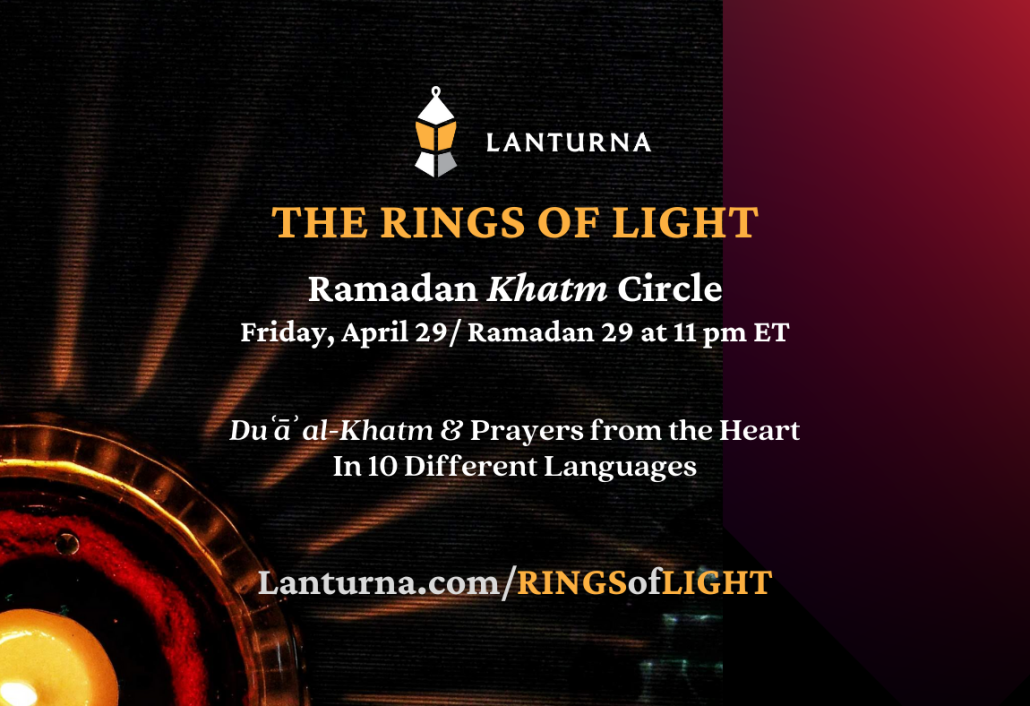 Join our communal prayer for completing our recitation of the Qur’an during Ramadan and for heartfelt prayers in more than ten languages, including Spanish, Urdu, Uzbek, Mandarin, American Sign Language, Farsi, Hindi, French, and more. If you would like to participate in your native tongue, please write to us at info@lanturna.com.

Download your free copy of Lanturna’s inaugural publication, and click below if you would like to contribute to this and forthcoming publications through a one-time contribution, or become a Lantern-Bearer through monthly contributions. Our publications are made accessible to all through benefactions like yours, which we pray will count as a perpetual gift of knowledge, as part of your fruitful legacy in the world.

The Qur’an has no beginning, it has no end. Like a ring, it is circular in nature, and every ring has an opening at its center. The opening of the Qur’an is al-Fātiḥah, which unfolds into infinite circles of meaning. Indeed, the entire Qur’an is an elucidation of al-Fātiḥah and encircles it like pilgrims around the Kaʿbah. Upon completing his own circles, Anas b. Mālik رضي الله عنه would gather his family to invoke the blessing of Allah through heartfelt supplication. The ummah has since come to recite what is known as duʿāʾ al-khatm upon completing the recitation of the Qur’an. The word khatm in Arabic is related to khātam or “ring,” and like a ring, the khatm is not a linear journey from beginning to end, but rather a cyclical path toward the infinite. Allah calls His Book “light,” and with this prayer, we hope to traverse countless rings of light together. The Prophet ﷺ once said أهل القرآن هم أهل الله وخاصته “Those who belong to the Qur’an belong to Allah with distinction.” May the Qur’an be the light of our hearts, our companion in our graves, and our intercessor on the Day of Judgment.